In my previous post, I asked why this change would result in a better performing system, since the total amount of work that is done is the same: 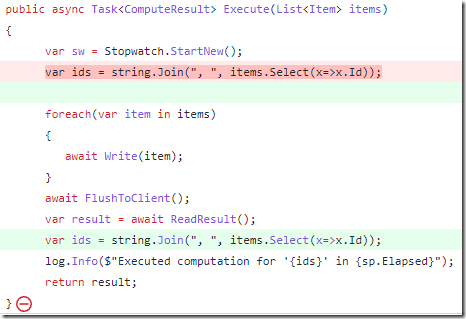 The answer is quite simple. The amount of work that our code is doing is the same, sure, but that isn’t all the code that runs.

In the first version, we would allocate the string, and then we’ll start a bunch of async operations. Those operations are likely to take some time and involve I/O (otherwise, they wouldn’t be async).

It is very likely that in the meantime, we’ll get a GC run. At that point, the string pointed to be the ids variable will be promoted (since it survived a GC). That means that it would be collected much later.

Using the new code, the scope of the ids string is far shorter. That means that the GC is more likely to catch it very early and significantly reduce the cost of releasing the memory.

Question: Items are iterated 2 times: in the Select and again in the foreach. Why not concatenating the Ids in the foreach? No Select at all?

The cost of iterating twice on the list (since it in memory) is pretty low. You could combine these iterations, but they aren't really that costly.

But isn't the logging statement at the end causing the scope of the string variable to be extended?

Yes, but the scope is from the creation to the log, so very small duration after this change.

In your question the statement was 'we can improve the performance of this code significantly'. So we have an async function which is executing so long that the objects allocated at the start will go to Gen2 and we can 'significantly reduce the cost' by an obscure optimization. Seriously?

If this is called enough, absolutely. The issue isn't so much that it is executed so long, the issue is that this is called enough times that statistically at GC time you'll have many such instances running async and moved to next gen.That is something that you can easily observe, because you'll see 80% - 90% CPU time goes on GC, and the reason for that is that it cleans Gen2 very rarely.