I had a chat with Shawn and Wai about building high performance databases.

I think we had a really interesting discussion, and as usual, your feedback is welcome.

An interesting question was raised in the mailing list, how do we handle non trivial transactions within a RavenDB cluster? The scenario in the question is money transfer between accounts, which is almost the default example for transactions.

The catch here is that now we have a set of business rules to apply.

Let’s see how this can look like in code, shall we?

I’m assuming am model similar to bitcoin, where you can break apart coins, but not merge them, by the way. What we can see is that we have non trivial logic going on here, especially as we are hiding all the actual work involved here behind the scenes. The code, as written, will work great, as long as we have a single thread of execution. We can change it easily to support concurrent work using:

With this call: session.Advanced.UseOptimisticConcurrency = true; we tell RavenDB that it should do an optimistic concurrency check on the documents when we save them. If any of the documents has changed while the code is running a concurrency exception will be raised and the whole transaction will be aborted.

This works, until you are running on a distributed cluster and have to support transactions running on different nodes. Luckily, RavenDB has an answer for that as well, with cluster wide transactions.

With this in place, RavenDB will ensure that this transaction will only be accepted if both compare exchange values are the same as they were when we evaluated them. Because any change touch both the document and the compare exchange values, and because they are modified in a cluster wide transaction, we are safe even in a clustered environment. If there is a change to the data, we’ll get a concurrency exception and have to re-compute.

Note that I’m using API 5.0 here, with 4.2, you need to explicitly call UpdateCompareExchangeValue, but in 5.0, we have fixed things so we do change tracking on the values. That means that it is important that the values would actually change, of course.

And this is how you write a distributed transaction with RavenDB to transfer funds in a clustered environment without needing to really worry about any of the details. Handle & retry a concurrency exception and you are pretty much done.

This post is here because we recently had to add this code to RavenDB:

Yes, we added a sleep to RavenDB, and we did it to increase performance.

That is, as we call it internally, and Issue. More specifically issue: RavenDB-14777.

Deeper investigation revealed that the problem was that we are too fast, therefor we are too slow. Adding a sleep fixed the being too fast thing, so we were faster again.

You might need to read the previous paragraph a few times to make sense of it, I’m particularly proud of it. Here is what actually happened. Our bulk insert code is reading from the network and as soon as we have some data, we start parallelizing the write to disk and the read from the network. The idea is that we want to be reduce the user time, so we maximize the amount of work we do. This is a fairly standard optimization for us and has paid many dividends in performance. The way it works, we read from the network until there is nothing available in memory and we have to wait for I/O, at which point we start writing to the disk and wait for the network I/O to resume the operation.

As a result, we would be able to read the data from the buffer more quickly, which meant that we would end up faster with waiting for network I/O. And that meant that we would do a lot more disk writes because we were better in reading from the network. And that, in turn, slowed down the whole thing enough to be noticeable.

Our change means that we’ll only queue a new disk operation if there has been 5 milliseconds with no new network traffic (or a bunch of other conditions that you don’t really care about). This way, we retain the parallel work and not saturate the disk with small writes.

As I said earlier, we had to pump the brakes to get into real high speed.

The recording for my webinar about event sourcing and RavenDB is up.

Let me know what you think about the techniques outlined there.

If you have a topic you think would be interesting to have a webinar on, let me know, I’m looking for more things to talk about.

RavenDB Cloud API and other updates 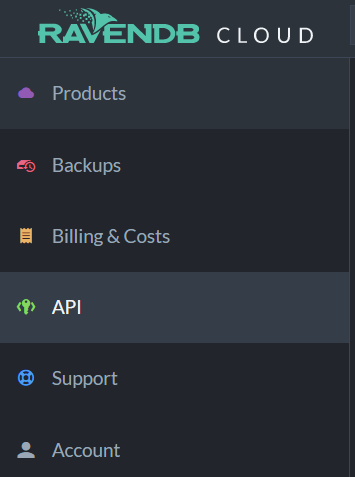 The RavenDB Cloud team has been silently working on a whole bunch of features. Many of them are backend features that as a user, you don’t really care about. But we finally got around to unveiling a lot of the stuff that is customer facing.

RavenDB Cloud now has a public API so you can automate your cluster and deployments. You can go into your cloud account, create an API key and you are done. We provide APIs for .NET and Node.js out of the box, or you can use Swagger to generate a client for your own platform.

Here is how you can use it to create a new cluster:

What might be of more interest to you is the ability to change the cluster type (which impact its capabilities and costs) on the fly. Here is how we can upgrade our previous cluster to a higher tier:

RavenDB Cloud is able to do such operation without taking anything down, and upgrading or downgrading the cluster is a live operation that takes up to 15 minutes.

In other news, as you might have noticed that I’m deploying this to Google Cloud. We are now fully live in GCP, not longer in beta.

On Amazon’s side, we have added support for the new Africa region. We are also planning on adding a whole bunch of regions on Azure side of the pond.

Please let us know what you are doing with the API, I’m sure your ingenuity is going to exceed our expectations.

I’ve started the work to update the Inside RavenDB book to version 5.0, covering all the new things that happened in RavenDB since the 4.0 release.

I have just completed a major milestone, I finished the chapter discussing time series and counters, and I would really appreciate any comments you have to make.

You can find the new chapter here, look at Chapter 5, I removed all the rest.

Please let me know what you think.

I’m going to be talking about event sourcing in RavenDB tomorrow. The registration link and full details are here.

The task today is to do some fraud detection. We have a set of a few million records of transactions, each one of them looking like this: 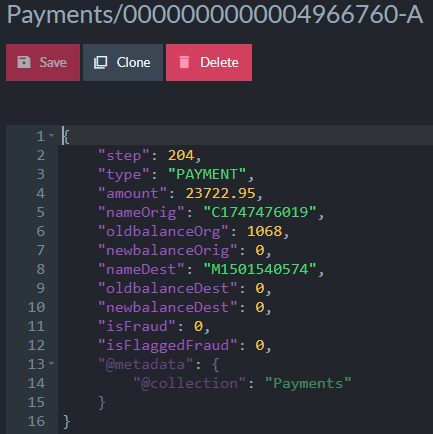 We want to check a new transaction against the history of data for this particular customer. The problem is that we have a very limited time frame to approve / reject a transaction. Trying to crawl through a lot of data about the customer may very well lead to the transaction timing out. So we prepare in advance. Here is the index I created, which summarize information about a particular customer:

I’ll have to admit that I’m winging all the actual logic here. I’m not sure what you’ll need for approving a transaction, but I pulled up a few things. Here is the result of the index for a particular customer: 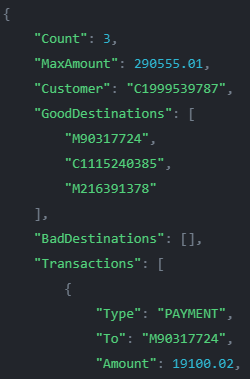 What is most important, however, is the time it takes to get this result:

The idea is that we are able to gather information that can quickly determine if the next transaction is valid. For example, we can check if the current merchant is in the list of good destinations. If so, that is a strong indication it is good.

We can also check if the amount of the transaction matches previous amounts for the transaction, as well as many other checks. The key here is that we can get RavenDB to do all the work in the background and immediately produce the right result for us when needed.

I got an interesting question while discussing timeseries, and I thought it would make for a good blog post. Consider the timeseries that we have on the right. It shows a particular sensor value over a period of time.

The sensor in question reports data only when the value changes, but we want to get the data on every 30 minutes scale. How can we do that? It turns out that this is pretty easy to do by just asking RavenDB to do so. No, there isn’t a specific feature for that, but we don’t need to.

All we have to do here is just write the logic as a query function. I’ll admit that date handling in JS isn’t nice, but it works. And it gives us the results in the right tempo for us to do something about it.

Not very exciting, I know, but RavenDB it the kind of database that aims to sit there do stuff, not get you all hot and bothered watching your production systems melt.

The invisible man in the middle: An investigative story

A user reported a bug to our support. When running on MacOS, they were unable to authenticate against a remote RavenDB instance.

That was strange, since we support running on MacOS, both as a client and as a server. We have had some issues around different behavior, but it is working, so what could the issue be?

RavenDB uses X509 certificates for authentication. That ensure mutual authentication for client and server, as well as secure the communication from any prying eyes. But on that particular system, it just did not work. RavenDB was accessible, but when attempting to access it, we weren’t able to authenticate. When using the browser, we didn’t get the “Choose the certificate” dialog either. That was really strange.  Digging deeper, we verified that the certificate was setup property in the keychain. We also tested FireFox, which has a separate store for certificates, nothing worked.

Then we tested using curl, and were able to properly access and authenticate to the server. So something was really strange here. Testing from a different machine, we were able to observe no issues.

The user mentioned that they recently moved to Catalina, which is known to have some changes in how it process certificates. None of which applied to our scenario, however.

Eventually, we started comparing network traces and then we found something really interesting. Take a look at this:

That was an interesting discovery. The user had an anti virus installed, and the AV installed a root CA and then setup a proxy to direct all traffic through the AV. Because it added a root CA, it was able to sniff all the traffic on the machine.

I found it interesting that we were able to actually use curl, I assume that Avast didn’t setup the proxy so curl would be included.

The solution was simple, exclude RavenDB from the inspected addresses, which immediately fixed the problem.

I spent some time trying to figure out if there was a good way for us to detect this automatically. Sadly, there is no way to tell from the client side what is the certificate that was used. If there was, we could compare it to the expected result and alert on that.