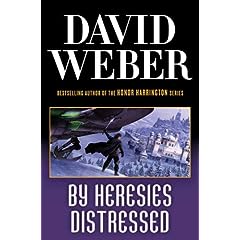 Hands down, David Weber is my favorite author. He has the ability to create rich worlds that are complete, logically consisted and interesting. While Weber is mostly known for the Harrington series, which I also really like, I have to say that the Prince Roger books (March Upcountry, etc) are the best military action series that I have read, and that the Safehold series is the best political action series.

Of the two, I actually think that I prefer the Safehold series, although it is a very close match, and I’ll likely change my mind if there would be a new book in the series.

All of that said, this book is actually about the latest book in the Safehold series, which includes Off Armageddon Reef and By Schism Rent Asunder. In a single sentence, I can tell you that Weber has managed to capture my interest all over again. His ability to weave so many concurrent plot lines is the key part of the high level of enjoyment (and quality) that I derive from the books.

The one problem that I have, like the one in the previous one, is stops too early! If I were smart, I would probably drop the series for a decade or so, and wait for Weber to pump enough books out that I can get them all in one shot.

That is not to say that the books are too long, or full of fluff. It is just that Weber is painting a big picture, and that takes time. Unfortunately, it means that by the book ends, I was left with quite a desire to known what the hell is going to happen next.

I prefer Timothy Zahn for military style SF. I've read one Weber book and I found it a bit too shallow for my liking.

Well since I have already posted I will just add Richard Morgan as one of my fav. military action writers.

The real cool thing about the plot lines is that when you re-read the books you have to ask yourself what the hell is going to happen next.

'War of Honor' What is happenning with the new terminus junction. I totally forgot the first time through.

i have just read harrington series as well (in about a month). now the wait begins :(

next book is comming next year but book after that could take a LOOONG time, since last book was released in 2005.

"...Unfortunately, it means that by the book ends, I was left with quite a desire to known what the hell is going to happen next."

I'm sure the author himself wants to know that too ;)

I will push this up in my queue. I did love the Prince Roger books - the Honorverse - I am not so sure about... I also loved the 1st 2 books in this series. Fun!!!

Richard K Morgan... I like some of his stuff - but there is also some aspect I do not like - can't put my finger on it.. That said - I read all his books. I did not love Steel Remains the same, but I have loved earlier stuff (Kovacs stuff).

"I'm sure the author himself wants to know that too ;) "

i think weber knows. at leas for harrington series he has an ending in mind.

"I would probably drop the series for a decade or so,"

a decade might not be enough :D. first honor book was published 1993 and i doubt he will conclude it by 2013.

With all the amount of work you are doing on regular basis it's little surprising you have a time to read books.

I get into military style sf every once in a while, but my interest always peters out once I remember that they never finish a story. It seems to be a convention of the genre that the war never ends, the conflict never gets resolved, the complete story never gets told. The author just puts it down and goes on to some other project, then sets that one aside in turn after a few books to pursue something else. Weber is as guilty of this as anyone. Honor never wins her war. Prince Roger never gets home.

That's my experience, anyway. I'd love to hear about counterexamples.

I have this coming from amazon, but I have to ask, does weber finally reduce the number of "had merlin still been a being of flesh and blood, he would have held his breath", and "the being once known as nimue"? The constant repetition hurts. Otherwise, loved the first two, looking forward to #3.

It still happens, but not as much.

It is annoying, yes.

@Greg - Counterexample, Prince Roger gets home in 'We Few'

Sounds like a good book. I'll have to put it in my list of books to buy since your review of the Roger series was so accurate. Weber also wrote a series called Dahak which sounds a distant future of this series that you may want to look in to.
www.davidweber.net/books/3-mutineers-moon.html

Prince Roger ended with an imminent civil war, the option for a LOT of stories there. I would LOVE to have another book in the series.

Dahak actually ended with closing pretty much everything.

Heirs of Empire is a GOOD book.