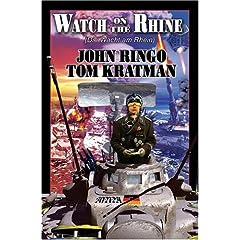 I just finished listening to this book, and it is… quite an interesting one. The basic premise of the book is enough to ensure that it would be interesting:

After the first [alien invasion] enemy landings in 2004, the German chancellor decides, despite fierce opposition, to rejuvenate survivors of the Waffen SS. Eager to redeem their tarnished honor, these veterans display the same steadfastness and fortitude that they did in Russia and Normandy.

I think that just from that, you can understand why it is interesting by default. I have to say, Ringo and Kratman managed to set a very believable world, and the handling of the topic was superb. I am going to have another post about Ringo’s style vs. Weber’s style, so I’ll skip a lot of that discussion in this post.

This is a Good Book, although I have to say, I find it much easier to accept alien invasions than the Judas Maccabiah SS brigade (which appear in the book).

I wonder the affect of Heinlein on Ringo’s writing. Some of the themes woven throughout the plot are definitely Heinleinism. The parasitic pacifist and peace through superior firepower, in particular.

I want to say that the book’s portrayal of the civilian attitude to the military mindset is unrealistic, but I have to say that unfortunately it isn’t so. There are some really stupid people out there.

The one thing that I find totally unrealistic in the book, however, was that political pressure was able to basically castrate the army. Mostly from environmentalist groups and the like. I have no idea how the German political and military game is played, but in most places, there is Peace and there is War. And you don’t mess around with the army in a time of war, the army tend to push back on that, and hard.