A natural consequence of RavenDB decision to never reject writes (a design decision that was influenced heavily by the Dynamo paper) is that it is possible for two servers to get client writes to the same document without coordination. RavenDB will detect that and handle it. Here is a RavenDB 2.5 in conflict detection mode, for example:

In RavenDB 3.0, we added the ability to have the server resolve conflicts automatically, based on a few predefined strategies.

This is in addition to giving you the option for writing your own conflict resolution strategies, which can apply your own business logic.

What we have found was that while some users deployed RavenDB from the get go with the conflict resolution strategy planned and already set, in many cases, users were only getting around to doing this when they actually had this happen in their production systems. In particular, when something failed to the user in such a way that they make a fuss about it.

At that point, they investigate, and figure out that they have a whole bunch of conflicts, and set the appropriate conflict resolution strategy for their needs. But this strategy only applies to future conflicts. That is why RavenDB 3.5 added the ability to also apply those strategies in the past: 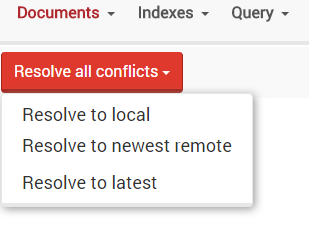 Now you can easily select the right behavior and apply it, no need to worry.

What document version is being picked when the "latest" timestamps collide? Windows timestamps often have 60 Hz only.

Mark, We arbitrarily choose one version. IIRC, this is done so if they are the same, the local version is used.