I previously mentioned that a large part of what we need to do as a database is to actively manage our resources, things like CPU usage and memory are relatively easy to manage (to a certain extent), but one of the things that we trip over again and again is the issue of I/O.

Whatever it is a cloud based system with an I/O rate of a an old IBM XT after being picked up from a garage after a flood to users that pack literally hundreds of extremely active database on the same physical storage medium to a user that is reading the entire database (through subscriptions) on every page load, I/O is not something that you can ever have enough of. We spend an incredible amount of time trying to reduce our I/O costs, and still we run into issues.

So we decided to approach it from the other side. RavenDB 3.5 now packages Raven.Monitor.exe, which is capable of monitoring the actual I/O and pin point who is to blame, live. Here is what this looks like after 1 minute run in a database that is currently having data imported + some minor indexing. 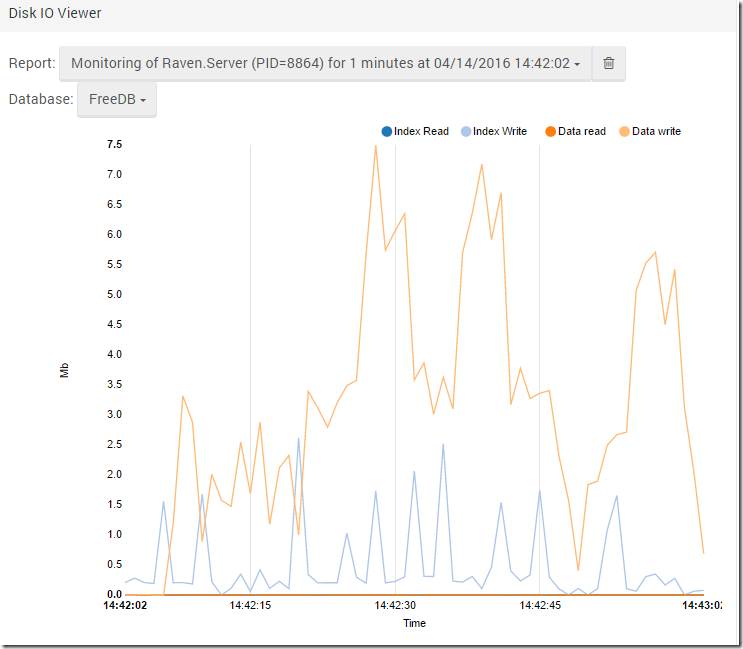 The idea is that we can use this ability to do two things. We can find out who is consuming the I/O on the system, and even narrow down to exactly what is consuming it, but we can also use it to find how much resources a particular database is using, and can tell based on that whatever we are doing good job of utilizing the hardware properly.

As a reminder, we have the RavenDB Conference in Texas in a few months, which would be an excellent opportunity to see RavenDB 3.5 in all its glory.