For a long time, whenever I was talking to customers about the business domain, I would explicitly avoid using the term “business logic”. Primarily because I never found such things to be logical in any way shape or form. A lot of the business decisions and policies are driven by a host of legacy reasons, “this is how everyone does it” and behaviors that has became accepted and then entrenched.

Take what is supposed to be a pretty simple rule. Given a warrant, when should an inmate be released? On the face of it, that seems like a pretty obvious and straightforward answer, right?

Depending on the type of warrant (can be for 48 hours, 5 days, 30 months, 10 years, life) the answer is quite different. For example, if someone was arrested at 3 PM on Thursday on a 48 hours hold, he must be released on Saturday at 3 PM. But that is actually a problem, because the prison does not release inmates on Saturday. So the release date is moved back (or forward(!), depending on a lot of stuff).

If an inmate is sentenced for life, that might mean that he is expected to die in prison, be released in 10 years, 25 years or be eligible to go on parole in 14 years and be effectively free. I did some research around sentencing rules around the world and I must say that this is confusing and quite sad. Even within a single legal system the amount of complexity, precedent, custom and variance is staggering.

At any rate, we need to figure out something that seems to be quite simple. Given an inmate and the warrants we have on file, what should be the release date. This can be as simple as having a single warrant, or a series of sequential warrants (arrest, held until trial, sentencing, etc). That is simple and pretty obvious. Go to the latest warrant, get the duration from that and then start computing the release date. Here we have another problem, from what date do we start counting? If the inmate has been under arrest for the entire duration, then we start from that point. If the inmate has been free (bail, etc), then we start from the point he got put back into prison. Sometimes the inmate was held for a while (several months, before getting bail, for example), so that will be counted against the sentencing period (or not, depending on a bunch of stuff). In short, being told “you are hereby sentenced to 10 years” can mean several different release dates, even assuming nothing changes.

So this is complex, and hard, and in many cases very much situational dependent. How do you approach handling this?

To start with, this is one of those cases that you can, should and require to get a specification, complete with examples, test suite and samples, etc. It may sound silly, because all we are doing is computing a date, but the implications are… important, especially for the people who are being held.

The specification will have a few straightforward cases, but also a lot of convoluted mess that with luck, you can get a lawyer to decipher, but most likely not. The way to handle that is to recognize the patterns that you know that you can reliably figure out and provide answers to those. If it was up to me, I’ll be producing a long hand report, like so: 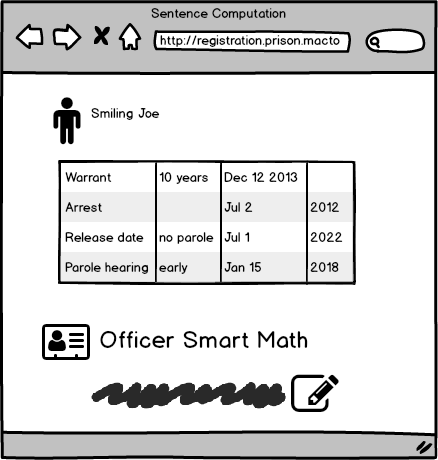 Note that this computation sheet is not the final say, instead, the Registration Office officer is going to sign on that, after having validated the dates independently.

For patterns that aren’t so easy to compute, a good way to handle that is to show the information you have and not give any answer, making the officer that will sign up on the correctness of this result do all the work.

As an aside, printing this report, including the computation and how it was arrived is a really good idea because it can be handed to the inmate as well as to their attorney. At this point, presumably they’ll double check the dates as well. This is important since a mistake in releasing an inmate that didn’t happen yet is free. After all, if an inmate is supposed to walk out on 2022 but we computed the sentence until 2025 and it was discovered in 2018, no harm was done (except maybe to someone’s nerves).

The human in the loop model is quite important in this regard, because of the notion of the single responsibility that I previously mentioned. Someone, a person, in actually responsible for the release date computation, and that should probably be a human that isn’t the system developer from a decade ago.