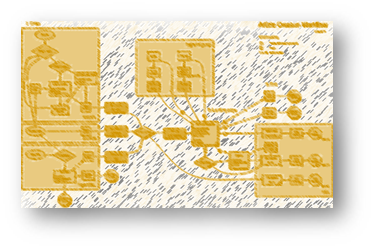 The whole point of having a prison is ensuring that the inmates are staying in. As such, the process of actually getting an inmate out of the prison is quite involved. I’m using the release workflow as an obvious example, but there are many such workflows inside the prison that are similar. The inmate’s intake workflow, or disciplinary workflows or even just inmate’s transfers which can be quite complex (and typically also happen in big batches).

In the previous post in this series, I talked briefly about the idea of workflows as an event publication with multiple signatories to the workflow operation. If this make no sense, let me try to explain.

The trigger for starting an inmate’s release can be the acceptance of a warrant for immediate release, the expiration of the warrant to hold the inmate. There are several other variants (transfer to another facility, death of inmate, escape of inmate, etc) that are related but are not too relevant for the discussion, so I’ll just talk about the immediate release and the warrant expiration.

For warrant expiration, the workflow starts from the Registration Office publishing the list of inmates that are supposed to be released today. In technical terms, they create a series of workflow documents that are in the Open state and this gets disseminated to the rest of the system. Immediate release warrant is usually served to the Registration Office, but may also be served directly to the block’s sergeant.

If the Registration Office got the immediate release warrant, things are identical as the usual scheduled release (except that this might be served at any time). However, if this is served to the block’s sergeant, things are more interesting. At this point, it is the block that will initiate the workflow, but the overall responsibility for verifying the warrant and ensuring the actual release is still on the Registration Office.

As an aside, the notion of "who owns this” is quite important in the prison. Mostly because if you mess up, there might be consequences. This can be holding an inmate past the due date (bad, can result in damages paid to the inmate and career consequences to the person who messed up) to releasing an inmate that wasn’t supposed to be released (really bad, sometimes it is not possible / feasible to hold them again, requires court approval, may end up in jail time for the person who messed up and also result in possible dangerous inmate being released). So the idea is that at any time, there is an owner for this process and a clear finger pointing at that person, “You’re to blame”.

Because of this, there are typically multiple steps in the release process. Consider the simple scenario of a scheduled release, we have:

I’m probably forgetting a few details in the middle, and there are branches for each and every one of these steps.

In terms of the technical details of how this works. The workflow document is being distributed throughout the system, and then various parties are now in charge of actually completing the various tasks in the workflow. For example, this may mean checking out the inmate’s personal affects from the safe in the morning, preparing for the release. So the steps aren’t necessarily in sequence or ordered.

The important thing is that the workflow document is published, and is now tracked. Typically, the release process is tracked by the Registration Office and the Command & Control Center. The Command & Control Center will typically be involved early in the process if an inmate isn’t released by the typical time, and the close of day process for the Registration Office includes verification that there aren’t any still pending inmate releases.

At any given point, we can track the process of the workflow from any point in the system (remember, changes are made locally and then distributed to the rest of the system). In there is a communication issue between different parts of the prison, that will typically show up as an alert that a particular workflow hasn’t been properly completed in the allotted time. At this point, external channel (walking & talking, usually) is used to verify the status of this particular inmate release.