One of the big changes in RavenDB is the new search engine, Corax. We want to replace Lucene with a purpose built search engine, capable of doing everything that we can do with Lucene, but far faster.

In this post, I want to discuss a particular detail of the implementation. Managing the posting list. In information retrieval, the idea of a posting list is that we have a list of document ids that match a particular term. I’m ignoring the details of how we create or manage the list. The basic idea is that we have a need to store a potentially large number of document ids, update them on the fly as well query them. Lucene manages that by creating immutable segments, but that design decision doesn’t match the way we want to do things in Corax. The problem with immutable segments is that you’ll eventually need to run compaction, which can be really expensive.

As a database, we already have a really good data structure that matches most of those requirements, it turns out. A B+Tree can do a pretty good approximation of a posting list, but it does have a problem. It’s not efficient in terms of space usage. A document id is a 64 bits integer, and we can make a number of assumptions about it. Therefore, I create a dedicated B+Tree like structure to hold the posting list. This B+Tree is called a Set inside of Voron, and it can hold any number of uint64 values. Internally, this is managed as two separate types of pages. The Branch pages (which are fairly standard B+Tree branches) and the Leaf pages.

Here is the first version of the Set Leaf Page implementation: 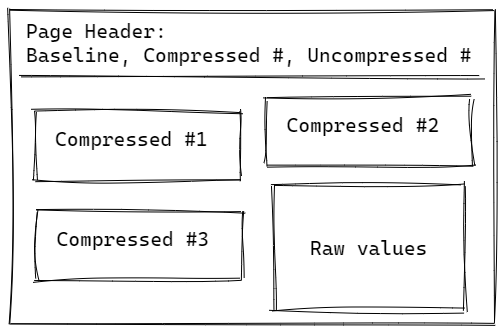 Let’s figure out what is going on here. The page has a notion of a base. That means all the documents IDs that have the same upper 33 bits. Basically, inside a single page, all the IDs are in the same 2 billion range. That means that even though the document ids are 64 bits, in the context of a single page, we can treat them as 32 bits integers. That turns out to be important, since most integer compression routines work on 32 bits integers.

The code isn’t particularly simple, but has a fairly straightforward approach to the problem once you understand the design.

One thing that I haven’t touched is the notion of removals. That is an important concept, and we handle that in an interesting way. Remember that I said that the baseline for the page is the upper 33 bits? That is because the numbers inside the page are 31 bits in length, we reserve the top bit to mark a value as a tombstone marker.  In other words, when we write to the raw values, we can have either a new value or a removed value, distinguished using the uppermost bit.

When we fill the raw values segment, we compress it alongside the relevant compressed segments. At that point, we’ll filter out the removed values. This is very similar to the segments that Lucene is using, but we do that on a page boundary (8KB), not across all values.

We are able to push a lot of values into a single page. We see typically thousands to tens of thousands of documents IDs fitting into a single 8KB page. That is pretty amazing, since even if you have a posting list that has millions of entries, the actual disk reads are minimal.

The design was with us throughout most of the development of Corax, but we ran into a serious issue with the way it works when we started to build the query optimizer for Corax.

That is an interesting statement, I think you’ll agree. What is the relation between a (very) low-level design of the on-disk data format and the result of the query optimizer?

Well, it turns out that one of the things that we need to know for the query optimizer is: “How big is this posting list?”

This question is actually really important to be able to generate optimal queries. And given the structure we have, we can provide a good answer to that, most of the time, but not always.

The problem is what happens when we want to remove a value from the set, or add an existing value. If the value already exists inside a compressed segment, we don’t open the compressed segement (which will require re-writing it from scratch), so we record an addition that is actually spurious. Conversely, if we try to remove a value that isn’t in the set, we’ll wrongly decrement the number of entries in the posting list, leading to issues with a mismatch between the record number of entries and the actual number we have in the posting list.

That was very confusing to figure out, I’ll admit. It was also really hard to fix, but I’ll address that in the next post in the series.