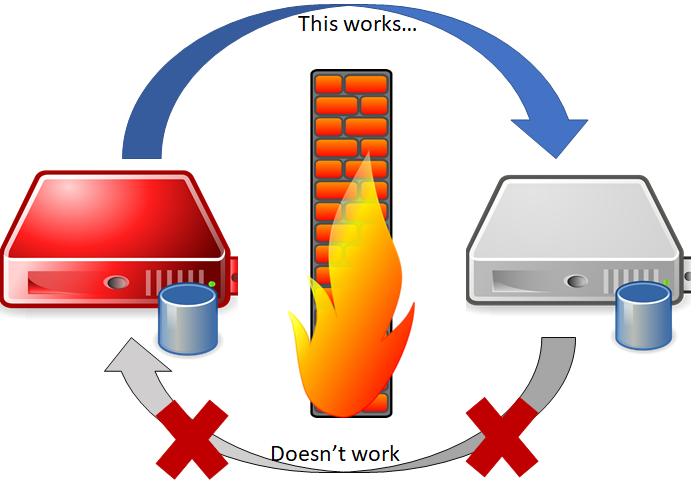 A customer asked for an interesting feature. Given two servers that need to replicate data between themselves, and the following network topology:

They are setup (with RavenDB) to do replication to one another. With RavenDB, this is done by each server opening a TCP connection to the other and sending all the updates this way.

Now, this is a simple example of a one way network topology, but there are many other cases where you might get into a situation where two nodes need to talk to each other, but only one node is able to connect to the other. However, once a TCP connection is established, communication is bidirectional.

This works, at least in theory, but there are many subtle issues that you’ll need to deal with:

In short, even though it looks like a simple feature, the amount of complexity it brings is quite high.

Luckily for us, we don’t need to do all that. If what we want is just to have the connection be initiated by the other side, that is quite easy. Set things up the other way, at the TCP level. We’ll call our solution Routy, because it’s funny.

You can write such a Routy service in a day or so, although the error handling is probably the trickiest one. However, you probably don’t need to do that. This is called TCP reverse tunneling, and you can just use SSH to do that. There are also many other tools that can do the same.

Oh, and you might want to talk to your network admin first, it is possible that this would be easier if they will just change the firewall settings. And if they don’t do that, remember that this is effectively doing the same, so there might be a good reason here.

Off - Are you going to post about the error on the blog? Could be interesting.

Cassio, Yes, I would. The underlying issue was that we are trying to trace some low level error in certificate error handling that only occur on the production setup and doesn't reproduce elsewhere in some rare failure more.