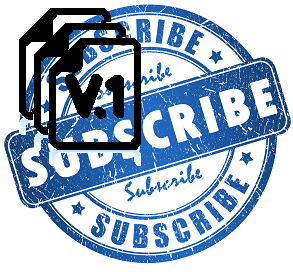 In my previous post I introduced data subscription and mentioned that there is more to it than just being able to get push based reliable stream of documents as they change. The problem is that RavenDB will send us the current document, and if the document has been modified multiple times quickly enough, we’ll only get it once. What is more, we are getting the document in our client code, but all we know is that it was changed, no what changed.

With RavenDB 4.0 we now have versioned subscriptions, working alongside the versioning feature. First, we define that a particular collection will have versioning enabled:

And now we can make use of versioned subscriptions.

In this case, you can see that we make use of Versioned<User> type, which indicates to RavenDB that we are interested in a versioned subscription. Instead of sending us just the modified document, we’ll get both the Previous and Current version of the document. In fact, we’ll be called with the Previous / Current version of the document on each change. You might have noticed the null checks in the subscription code, this is because when a document is created, we’ll get it with null Previous value and when a document is deleted, we’ll get it with a null Current value. If the document has been deleted and recreated, we’ll be called first with a Previous instance and null Current  and then null Previous and a Current instance.

In other words, you are now able to track the entire history of a document inside RavenDB, and make decisions based on that. Like regular subscriptions, we have the ability to script a lot of the logic, like so:

What this subscription will do is to analyze all the changes on a user, and then send us the user document as it was banned.

It is important to note that this doesn’t require you to be monitoring the subscription as it happens, you can do this at any point, and you’ll get the historical data. For that matter, this is also a high available solution. If a client goes down, it (or another client) can resume from where it left off, and if the server goes down, the client will transparently be able to failover to a replica without any user or admin involvement, running from where it left off.

We only started looking into the implications of this feature, but the potential for analytics on the changes is already quite obvious. We are going to send you the data in the order it was generated, so you can build a model of changes as it make sense in your domain, without having to go to the trouble of manually keeping track of everything.

Will it be possible to have an async subscribe delegate as well as a state object passed into to avoid closure allocs? What about backpressure?

Daniel, The actual API is using IObserver, so you can pass an instance with your state, yes. We'll probably need to implement IAsyncObserver to handle an async calls, though. Backpressure is handled by batching, we send you batch, you process and ack it, then we send you the next one

Why did you make the Script in the Criteria a string, rather than a lambda expression like is used in the Subscribe method?

Stuart, The Subscribe method runs in the client side. The Script runs in the server side. It is really hard to get it to send properly.

We have some basic attempts to get it working, but they aren't good enough yet.