Shortly after I decided to create myself a web site I'd a very annoying problem to solve. The web site look & feel.
I hope that I don't need to tell you how important that a site will have a recognizable and pleasing to the eye look.

You can see that I pick a warm scheme for my site, simply because I like the colors.
I don't like the cold color schemes, the blue on gray or the gray-scale sites may look proffesional, but I think that they lack life.
There are many ways to create a color scheme, I simply choose a warm color (in thiscase FF9933 which translate to this color, and then I started playing, seeing what colors are working along with it. The result, if I say so myself, is quite pleasing to the eye.

But still, I needed one more quality for this to work. I needed a logo, this was terribly important to me, to get the logo exactly right.
So I fire up Photoshop and after a  couple of hours whipped a first proto-type:

This is nice, and I was satisfied with it, especially since it seemed to tax my rather limited graphical abilities. I created this logo following the instructions from Pega Web which tells you how to create a logo even if you are one of those who have trouble drawing a straight line with a ruler.
Considerring that my graphical apps were limited to a trail version of Photoshop that I got from a magazine subscription when dinosaurs roamed the earth and some knowledge of MS Paint.

I wasn't satisfied with this, however, and decided that abastract forms wasn't really for me, so I took a deep breath and tried to create something better:

Much better, I thought, now the “Custom Software Design” caught the eye nicely, and the strange shape (E in Windings2) completed the color balance nicely. But I was satisfied for a short while only, because this still has an amature quality to it.

I thought about it for a while, then decided that it the problem was with the abstract watermark (the orange shape in the background). It was too abstract, and was more appropriate for a cooler color scheme. In fact, merely inverting the colors of the images caused a big improvement:

Not perfect, but better than the originals, obviously this approach doesn't work. Now, considering that this is supposed to be about software, I thought that I could simply use a code background instead of a watermark. Here is the result:

This is nice, actually, and I liked it quite a bit, but is still wasn't quite what I was looking for. I wanted a background that would've more general meaning, and not one so specifically tied to the current purpose of the site. After all, the purpose might change, and I wouldn't want to change the logo then, would I?

So now I found a picture of a rhino and drew it's outline, and then I'd this picture: 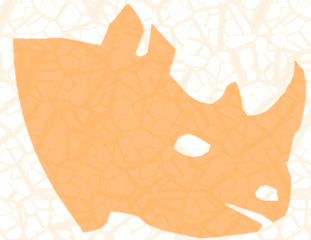 Now, this is nice. It took me some trying, much eventually, I'd the following logo:

This is nice, you can see that I made some changes, the red symbol is much prettier this way, my name is really noticeable, and I like the effect of the green initials. Unfortunately, this image doesn't scale down very easily, and doesn't look good in ??x?? which I uses as the logo size for my blog.

Time for another logo, this time, I was very pleased with it, I got rid of the graveyard's font of my name, and had some nice effects on it. I also removed the "Custom Software Design", this is for the future, not for now. I'd create two rhinos, in different color, which contrast quite well on the logo. Between the rhinos there was a lot of dead place, so I put some the symbol there to fill up the space.
The result is

Still not good enough for me, too pale by much, and the left rhino is orange on orange, which make the whole logo looks sickly. Not a problem, actually :-)
I changed the color of the left rhino to pale green and increased the opacity of both rhinos, so there are less pronounced. I also increased the vitality of the background so it would be more attractive. Instead of the nearly invisible decoration, I've golden threads running throughout the logo. My name has some nicer effects on it, and the box that contain it got some new effects as well.
The result is

Still not good enough, though. In the middle, those two symbols annoys me, but I can't just get rid of them, that would leave me a hole in my logo. I looked around a bit found a solution, another symbol, this time colored so it goes from blue (right) to green (left) throughout the whole rainbow.
I'm pretty proud of it,

I think that it's very well done, and I invested quite heavily in it, the process that you saw here took about a month, all in all. But I'm quite satisfied with the result. Naturally, I would like to know if you've suggestions.