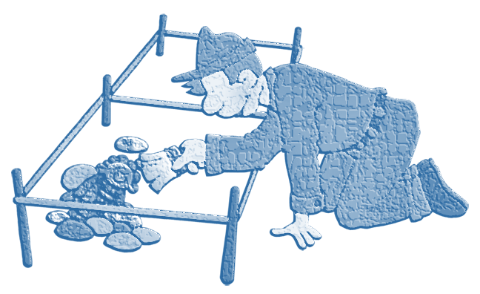 We recently got a CV at the office, from a developer that has about three years of experience as a Full Stack Developer. The CV was… strange, in the sense that I was intimately familiar with all the web technologies in it. This is peculiar, because about five years ago I just threw the gauntlet and stopped even trying to pretend that I have any skills in building anything that is near the front end. And my skills as a front end developers has been atrophying even before that.

I mean, <table> is still how you properly layout things today, as far as I’m concerned. However, in a rare moment of self reflection, I have to admit that I wouldn’t hire myself to do anything related to the browser.

So we have a CV with the following keywords:

And that’s a bit suspicious. Oh, certainly these are foundational topics for a front end developer, and I get the need to sometimes pack a CV with keywords for the purpose of matching. However, not having anything else there is strange, and not usually indicative of a good outcome. We gave the candidate a call and talked for a bit, nonetheless.

It appears that the first job the candidate had after university was maintaining and building an already existing application. The architecture and framework choices were already done and there hasn’t been any pressing need to change them. Therefor, that was what the candidate was used to and familiar with.

So far, this is reasonable story. I can certainly see how this can happen. What I don’t understand is the candidate’s reaction to that.  Sure, the current job may be resistant to changing things. It works, probably reasonable well as far as the current workplace is concerned. And moving to a new technology just because a person want to (literally in this case) pad their resume is a bad idea.

But what about the candidate? At this point, they are actively hunting for a new job. I would expect them to take a look at the market, evaluate their current situation and identify that they are currently working on something that give them no real value for prospective employers. In fact, I would be willing to bet that this is a large part of why this candidate is looking for a new job.

I would expect the candidate at this point to actively work at improving their skills. Spend some time watching Plural Sight videos, build sample applications, go over tutorials, etc. Coming to a job interview and saying something like: “My current job only uses jQuery, but I have been studying React on the side using Plural Sight and here is my GitHub’s sample project showing my progress so far” is amazing. It indicates a lot about the candidate, including the ability to learn and develop oneself on your own.

We aren’t going to go forward with this candidate, but I’m certain that they will be able to find another position in a company where their jQuery skills will be very valuable. However, I don’t expect that they’ll learn anything new in that place, and in 3 years or so, if they will be looking for a new job, they will be in the same exact same place.

On an unrelated note, I have another CV which listed both WinForms and VB6 as core skills.

I would assume that the underlying issue is that the candidate has a lack of pragmatism i.e. is not able to be realistic. I once asked someone in an interview about jquery, back in the day when jquery was hot, and he later complained to the recruiter that I had asked some questions about an unknown tech. A resume like that can also be an indicator that he is tending towards the social dysfunction end of the spectrum, and not in the nerd-genius way.

Where I work the higher-ups launched a moon-shot type of project last year to turn our in-house systems into a platform to monetize. It was envisioned to be a cutting-edge tech platform. Against my advice (I am way down on the totem pole) the UI was outsourced. When I browsed the code they produced I saw it is a zombie creation thickly caked with jquery. The UI design also screams "canned $25 themed bootstrap skin from the internet".

I would love to know your opinion about being a real "Full Stack Developer" these days. Is it reasonable to look for a developer who knows all the complexities of backend development (Particularly for the enterprise, at least while designing distributed applications or Micro-Services) and expect them to know React, Angular, TypeScript, and many other front-end technologies on the same level?

Side Note: I'm working in healthcare and as far as I can see, most developers in this industry are low-skilled but highly experienced. If you look at the healthcare giants employees (and I worked with many of them), most of the developers are claiming as full-stack developers, while they don't know the basics of software design, both on backend or frontend development. If you are in a startup culture (which is rare in healthcare), you end up getting hired based on criteria that don't matter at all. I heard statements like "He knows Billing/Data Exchange during his experience in XYZ company", or "She was part of the Abc hospital integration/migration project" a lot during interview process a lot. And now, most of these developers are full stack!

I dont know, WinForms and VB6 as "core" skills say a long time in the game. That could be a good thing if other modern non-core skills are listed.

Peter, The main issue here is simple. In a situation where it would be quite beneficial to the candidate to learn new technologies (better position and pay), the candidate made no attempt to do so. That indicates one (or more of the following options):

Now, if the candidate was already employed and being tasked with moving to a new tech, I could certainly see this being the employer's responsibility to provide time / training to learn the new stack. But when you are looking for a job and not spending at least a little time to update your skills? That is not a good sign from my point of view.

Saeid, The Full Stack Developer is a great question, going to answer it in a full post. About the business experience, there are many fields where this is _critical_. It might not seem like it is important for a developer to understand the billing process in company A when they are hired in company B, but in the same industry, that can mean the difference between two weeks of orientation and six months of figuring things out. In most large business systems, you aren't going to be spending a lot of time making architectural level decisions on a day to day basis. If you do, that is an indication of no architecture. But you'll be working with the business requirements and handling directly throughout. For example, simply being aware that you do not log certain fields anywhere can be something that is critical in certain fields (such as healthcare). Another example is just understanding a business process (such as claim submission and processing) which can be incredibly complex and require you to understand it to a good degree before you can go and muck about in the code. Even if the actual code generated is of low quality, that doesn't matter much to the business.

Not sure if my personal experience jives with your advice. I've submitted resumes and applications with [insert buzzword du jour here] experience, including projects on Github that are not only complete but have active users (libraries in wide usage by developers in a language community, even referenced in O'Reilly books and suchlike).

Overall experience is one of rejection - whereas maybe 5-10 years ago I'd be getting dozens of interviews and my choice of jobs, nowadays interviews are so rare and the whole process so disheartening I've generally abandoned the process and decided to stick with my current job, even though I feel more than ready to move on.

One such example - an online test to write part of a game in JS. This was maybe a couple hours' work. Submitted the test, only to get an invite to a longer test - a full day's work to build a project from scratch! Of course to make sure I was being "honest" and not somehow cheating by getting someone else to build this project for me the whole process would be monitored through some online software.

I told their HR to take their job and shove it - in only slightly more diplomatic language - but I'm sure some might be desperate enough to go through the whole rigamarole. If this were an isolated case it would be fine, but I've encountered so many problems with the hiring process in tech these days I'm close to either leaving the industry altogether (once my current gig comes to an end) or trying my luck at starting my own company, as it's clearly a waste of time building a portfolio on Github and developing your skillset.

So far, I have had candidate that came to me and solved the problem using the sample solutions in the blog. I never minded this one bit, because it is very helpful to evaluate a candidate. Did the candidate actually understand the code? What happens if you change a requirement, can they figure out how to answer it, etc.

Given that I fully expect people to use Google on their day-to-day work, I see no point in trying to avoid "cheating". Once you get down to actually talking about code and practical stuff, it is usually easy to separate the chaff.

I agree with Jake. I am an experienced developer with tons of project experience, website, github profile, google play profile, etc. How much does that help me these days? Zilch.

This blog post is one example of how tech hiring is broken. If you have enough experience and an aptitude for IT then picking up the technology du jour is not an issue. Tech hiring these days does not account for that. The little games that you make your candidates play does not accurately detect that aptitude. You are deluding yourself and inflating your ego.

Tech hiring these days is a series of useless tests and hoops a candidate has to jump through - all of which don't accurately gauge a developer's true competency in a particular organization.

I don't know - I don't put things on my CV I haven't used for jobs, so the CV is only half the story.