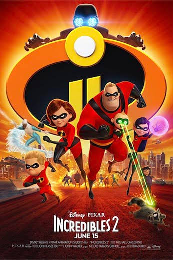 I just got back from watching the Incredibles 2. The previous movie was a favorite a mine from first view, and it is one of the few movies that I can actually bear to watch multiple times. I was hoping for a sequel almost from the moment I finished the first movie, and it took over a decade to get it.

I actually sat down with my 3 years old daughter to watch the first movie before I went to see the second one. I’m not sure of how much she got from it, although she is very fond of trains and really loved the train scene (and then kept asking where is the train). It is unusual for me to actually “prepare” to see a movie, by the way. But it did mean that I had the plot sharp in my head and that I could directly compare the two movies.

First, in terms of the plot. It was funny, especially since I got a kid now and could appreciate a lot more of the not so subtle digs at parenthood.

Also, at this point I nearly got a heart attack because a talking book (again, my daughter) starting neighing at me at the middle of the night just as I got into the house.