Sometimes we get requests from customers to evaluate and help specify the kind of hardware their RavenDB servers is going to run on. One of the more recent ones was to evaluate a couple of options and select the optimal one.

We got the specs of the two variants and had a look. Then I went and took a look at the actual costs. These are physical machines, and the cost of each of the options we were given, even maxed out, was around 2 – 3K $.

One of the machines that they wanted was using a 7,200 RPM hard disk and was somewhat cheaper than the other. To the point where we got some pushback from the customer about selecting the other option (with SSD). It took me a while to figure out what was going on.

This organization is using RavenDB (and the new machines in question) to run their core business. One of the primary factors in their business in the speed in which they can serve request (for that business, SEO is super critical metric). This business is also primarily focused on getting eyes on the site, which means that their organizational structure looks like this: 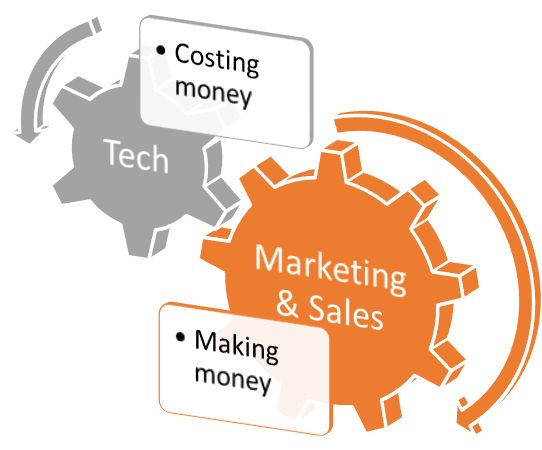 I have run into this several times before, but it took me a long while to figure out that in many cases, the result of such arrangements is that the tech department relies on other people (in this case, us) to tell the organization at large what needs to be done. “It isn’t us (the poor relation) that needs this expensive (add 300$ or so) add on, but the database guys says that it really matters (and you’ll take the blame if you don’t approve it)”.

I don’t have anything to add, I’m afraid, I just wanted to share this observation. I’m hoping that understanding the motivation can help alleviate some of the hair pulling involved in those kind of interactions (yes, water is wet, and spending a very small amount of money is actually worth it).

It's amazing how most non technical managers would take a 300$ cost reduction in a blink of an aye without ever considering the consequences ... and taking pride in the decision as well, regardless if it actually was a bad one with great costs on other fronts.

Pop Catalin, The problem is that the 300$ is easily measurable, while the cost that they actually incur is much harder to quantify easily.

Where I had worked they had cut down the free botteled water supply. The company saved a few bucks but was loosing more costs now; people were working effectively less, because now they had to go out to get their water somewhere else outside ...

Ryan, It is actually much worse in reality, because you aren't accounting for resentment for such change. See this great post about it: https://steveblank.com/2009/12/21/the-elves-leave-middle-earth-%E2%80%93-soda%E2%80%99s-are-no-longer-free/

No more free sodas = “Our bottom line is more important than the happiness of our employees.”, but this is just the beginning ... next evaluation meetings will start to be all about costs and not about achievements ... then the hiring waves of questionable talent and fit for purpose engineers but lower salary scales, then the anyone is replaceable mentality and flood of bureaucracy with TPS reports introduced to fix the productivity issues of unfit engineers, then discussions why are some seniors are so expensive compared to the rest while there's a general lack of productivity ... then the complete crash down into an unrecoverable and focused on mediocrity company where no great engineers ever want to work in ...

When you see the "no more free sodas" announcement .. RUN! It all starts then ...