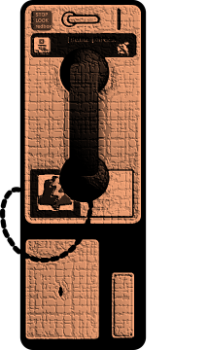 I’m going to feel like an old man for this post, but if you were born post 1995, it is likely that you have no idea what I’m talking about in this post, crazy as this sounds to me.

Before there was a phone in every pocket, there were land lines. It is like today’s phone, but much larger, you could only do voice calls and if you wanted to screen your calls you needed to buy another appliance. If you’ll watch the first few sessions of Friends, you’ll see how important a detail that can be. If you were out of the house or office and needed to place a call, you could use something called a public phone booth or a pay phone.

Sadly, the easiest way I can convey what this was is to invoke the Tardis. A small booth in which you had a public access phone. Because phone calls used to cost a lot, these phone had a way to drop some coins or tokens into the phone to pay for the phone call.

As a child, I didn’t have a wallet and still needed to occasionally make calls. Being stuck without cash at hand wasn’t such a strange thing so there was another way to perform the call. You could reverse the charge, instead of the person placing the call paying for it, you could call collect. In that case, the person answering the call would be paying for it. Naturally, since money is involved, you need the other party to accept the charge before actually charging them.

At some point in time, you called a special number and told the operator what number you wanted to do a collect call. The operator would ring this number and ask for permission to connect the call and charge the receiver. I think that the rate for a collect call was significantly higher than the normal call, so you wouldn’t normally do that.

As part of the system automation, the phone company replaced the manual operator collect call with an automated system. You would record a short message, which would be played to the other party. If they wanted to accept the call (and the charge), the could press 1 on the phone, or disconnect to avoid the charge.

As a kid, I quickly learned that instead of telling the other party who is calling and why (so they would accept the call), I could just tell them what my phone number is. In this way, they would write down the number, refuse the call and then call me back. That would avoid the collect toll charge.

I remember that at some point the phone company made the length of the collect hello message really short, but I got around that by speaking really fast (or sometimes by making two separate calls). I remember having to practice saying the phone number a few times to get it done in the right time.

or have someone call you collect TO a public phone and have the phone company charge itself.

Used this when travelling to let family at home know I'm ok without incurring charges... leave a very fast message where I was and that I was Ok. The bonus was I didn't have to be on the phone with mother describing details about the travels :)

Peter, IIRC, you couldn't do collect calls to public phones, but that was a long time ago.

Well, I remember when I was an exchange student in US around 1995. I made a call home and the operator asked me how much money I would spend. Afterwards the public phone kept calling because the operator did not stop my conversation in time. I could not leave because in the very same room, we were registering officially as students :-)

I remember an old commercial about this. A family was at the hospital having a baby, and the father I think did a collect call to the grandparents. And he was like "Wehadababyitsaboy" really fast as the message. Cut to grandpa who hangs up and when grandma asks who it was, he says "It was {Son's Name}. They had a baby. It's a boy" with a big smile.