I run across this Twitter thread and I’m in… awe, I want to say, but in a really horrifying manner.

The thread started with DHH calling out this job posting: 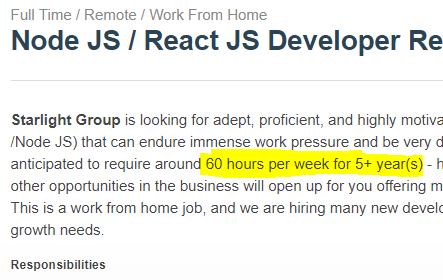 I’ve marked the important piece. You can read the twitter thread for the gory details. Based on the job posting and the interaction of the CEO on twitter, I’m going to assume that this job pay six to nine times more than the average developer can make, because otherwise I can’t really figure out why anyone would work in such a place.

I have had two (or three) separate burnouts before I was thirty. I was single, no kids, and I worked crazy hours. I was productive and I burned out. Mid 2009 was a fun time for me, I was physically nauseous every time I sat in front of a computer  and seriously considered a career shift to construction. A large number of life decisions were made as a result of that.

And while I admit that being young and discovering things is its own reward, this isn’t really something new. Workplace productivity is not an unexplored subject and I would expect anyone in either HR or management position (and certainly a CEO in a company that is busy hiring people) to be at least peripherally aware of them.  You might sometime need to work crazy hours, I fully understand crunch time and “OMG, production is DOWN”. But if you do that, you need to understand that this is done with eyes open.  Such scenarios should be rare and you should be aware that any temporary increase in productivity will need to be paid off by reduced productivity down the line.

Again, this isn’t new. You can go to Ford in the early years on the last century to read more about how to increase productivity. So asking for 60 hours per week on an ongoing basis is pretty… crazy.

Let’s assume that this is for five days a week position, shall we? Based on the job posting on the CEO’s behavior on Twitter, I assume that it isn’t the case, but humor me.

This means, Monday to Friday, you start working at 9 AM and finish at 9 PM. If you have kids, this means never reading them a bed time story, not being able to see them perform, never coming to PTA meeting. If you have a spouse, it means a relationship that is mostly around texts, because you ain’t going to see them.  If you don’t have a significant other, good luck finding one with the time allotted.  But 12 hours days are probably not going to cut it. So let’s say that you work only 10 hours a day, but we’ll include Sunday as well, to make up for the “lost time”. You still log in at 9AM, but now you get to leave at 7 PM.

Oh, and if you better not be sick, or have to drive your mom to the airport or need to visit the DMV. Nobody got any time for that. On a more serious note. This kind of environment will make you sick. It can take a lot of time to recover from that, both mentally and physically.

I can’t imagine anyone who would be signing up for something like that. Actually, I can, quite easily. There are plenty of professions where this is normal. To pick examples off the top of my head, lawyers, nurses and doctors all work crazy hours, or at least, that is the impression I have. Let’s check, shall we? The following results are pretty much the first result of googling the question.

The key here, for both lawyers and doctors, is that typically after a pretty harsh initial period, you can expect to gain a lot for your work. In other words, there is a high probability that there is going to be a good return on this investment.  For this job posting, again based solely on the text and the CEO’s behavior, I’m assuming there is no such upside.

Whenever we sent job acceptance letter, I used to put in a statement about Hibernating Rhinos being a place where you didn’t have to leave the office at 9 PM. Since then we grew a bit and got a few people who are a night owls, so they come later to the office. That somewhat spoils this statement, but I can still state that no one works crazy hours.

By the way, that is not because some of the devs haven’t tried. I’m very familiar with the excitement of being almost there. At the cusp of figuring out this bug or completing that feature. It sometimes make sense to keep going and complete just this one task and getting there. And this is fine, if you pace yourself. But with some people, I had to tell them that if they keep staying so much in the office, I’m going to start charging them rent. That seemed to do the trick.

When I founded Hibernating Rhinos, I wanted to create a place that I would like which would give me interesting things to work on . In the decade that Hibernating Rhinos has been around, I don’t believe that we ever had a crunch time that didn’t directly relate to a customer problem (and these tend to be rare) . Whenever I had to make the choice, slipping the release date has always been the better option in my eyes rather than sacrificing quality or keeping people at their desk to try to get more done.

This includes the last three years in which our team basically rebuilt a distributed database from the ground up and gotten a minimum of 10x performance improvement across the board. This was without anyone expected to put in sunrise to sundown shifts. Given that I think that this is about creating a marketing/sales platform. I’m… not impressed by that. In fact, I’m pretty sure that if they start out with planning to squeeze their own people dry from the get go they have the same level of cluelessness in other aspects of the business. On the other hand, assuming that they actually manage to get a viable product out, someone is going to have a field day threading through all the holes that tired, listless and demotivated developers have left in the system.

I think that I can summarize all of this post in a single word: BEWARE!

Businesses are built on people and without a long term view of the sustainability of products the people will suffer. There far too much of this kind of thing in the tech industry, been there done that. Expecting anyone to consistently work 60+ is unsustainable.

I wonder how they plan to react to real emergency, like you said: production is DOWN. It's not like they can ask developers to stay late, right? And if developers are constantly tired you can bet emergency will come for sure - assuming they get anywhere near production release at all.

Just another tech-illiterate CEO that think "it's just typing on keyboard". Ignore it, or better, DDOS it.

This pretty much guarantees that you will not have a developer that grows. Most developers read books and take some courses outside of work, if you are expected to put in 60 hours a week I don't think anyone would want to relax with a programming book when they get home.

In more countries in Europe anything above 40 hours/week is illegal, other than exceptional cases, when the overtime must be paid and free hours as a compensation must be given in the next month.

I think it all depends on how you get paid for this long hours. I am working as a contractor most of the time, and personally, would not mind working longer hours because I will be paid for that hours, especially if it is not 9 am to 7 pm, but more flexible hours, like 9 am to 5 pm and 9 pm to 11 pm... But if it all full-time job without pay it will be difficult to find a person who will accept that hour, but still you can find such people, mostly recent graduates who have time and looking for experience.

Alex, Actually, even if you are paid by the hour, you need to be careful here. The amount of money you make doesn't matter, you still have to deal with burnout, even as a consultant. Note that doing this on an occasional basis is fine, but doing that as a way of life is bad for you.