A user came to us with an interesting scenario. They have a RavenDB cluster, which is running in a distributed manner. At some point, we have a user that creates a document inside of RavenDB as well as posts a message using SQS (Amazon queuing system) to be picked up by a separate process.

The flow of the system is shown below: 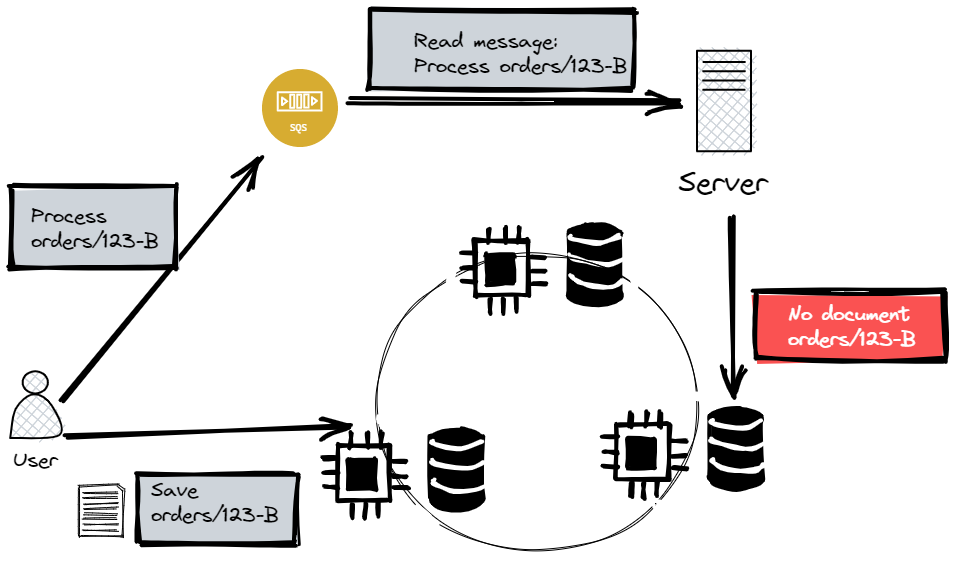 The problem they run into is that there is an inherent race condition in the way they work. The backend worker that picks up the messages may use a different node to read the data than the one that it was written to.

RavenDB uses asynchronous replication model, which means that if the queue and the backend workers are fast enough, they may try to load the relevant document from the server before it was replicated to it. Amusingly enough, that typically happens on light load (not a mistake, mind). On high load, the message processing time usually is sufficient to delay things for replication to happen. In light load, the message is picked up immediately, exposing the race condition.

The question is, how do you deal with this scenario? If this was just a missing document, that was one thing, but we also need to handle another scenario. While the message is waiting to be processed in the queue, it may be updated by the user.

So the question now is, how do we handle distributed concurrency in a good manner using RavenDB.

This is typically used to detect changes in a document behind our backs, but we can use that in this scenario as well. The idea is that when we put the message on the queue, we’ll include the change vector that we got from persisting the document. That way, when the backend worker picks up the message and starts using it, the worker can compare the change vectors.

If the document doesn’t exist, we can assume that there is a replication delay and try later. If the document exists and the change vector is different, we know the document was modified, and we may need to use different logic to handle the message in question.