In RavenDB 4.0, we decided to finally bite the bullet and write our own query language. That led to a lot of really complex decisions that we had to make. I already posted about the language and you saw some first drafts. RQL is meant to be instantly familiar to anyone who used SQL before.

At the same time, this led to issues. In particular, the major issue is that SQL as a language is meant to handle rectangular tables, and RavenDB isn’t storing data in tables.  For that matter, we also want to give our users the ability to express themselves fully in the query language, that means support for complex queries and complex projections.

What do I mean by that? Well, here is a pretty simple query:

And here is how we can ask for specific fields:

You’ll note that we moved the select clause to the end of the query. The idea being that the syntax will hint to the user about the order of operations in the pipeline.

Next we add some filtering, giving us:

This isn’t really interesting except for the part where implementing this was a lot of fun. Things become both more interesting and more obvious when we look at a full query, with almost everything there:

And again, this is pretty boring, because except for the clauses location, you might as well write SQL. So let us see what happens when we start mixing some of RavenDB’s own operations.

Here is how we can traverse the object graph on the database side:

This is an interesting example, because you can see that we have traversed the path of the relation and are able to fetch not just the data from the documents we are looking for, but also the related documents.

It is important to note that this happens after the where, so you can’t filter on that (but you can plug this in the index, but that is a story for another time). I like this syntax, because it is very clear about what is going on, but at the same time, it is also very limited. If I want anything that isn’t rectangular, I need to jump through hops. Instead, let us try something else…

The idea is that we can use a JavaScript object literal in place of the select. Instead of fighting with the language and have to fight it, we have a very natural way to express projections from RavenDB.

The cool part is that you can apply logic as well, so things like string concatenation or logic in the select clause are absolutely permitted. However, take a look at the example, we have code duplication here, in the formatting for customer and contact names. We can do something about it, though: 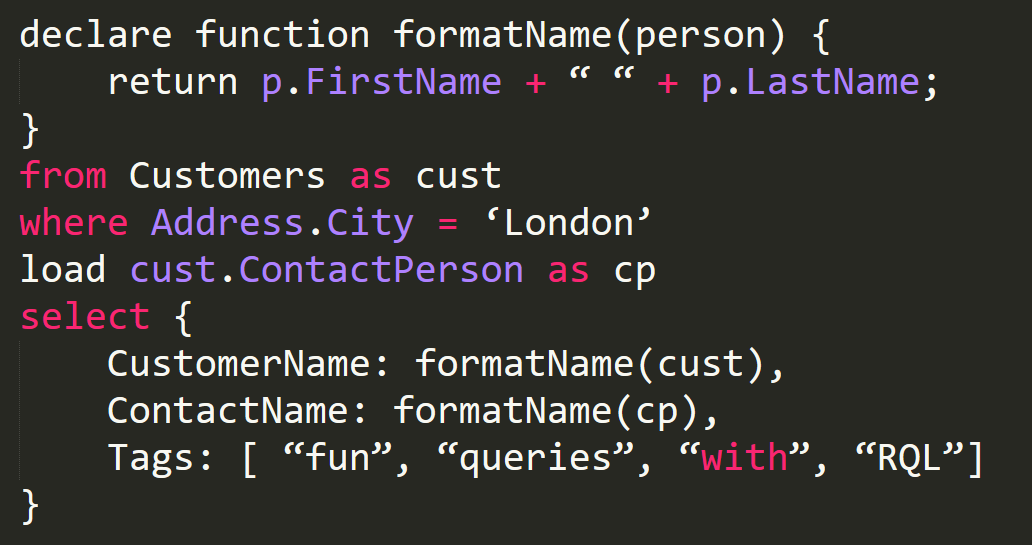 The idea is that we also have a way to define functions to hold common logic and handle the more complex details if we need to. In this manner, instead of having to define and deploy transformers, you can define that directly in your query.

Naturally, if you want to calculate the Mandelbrot set inside the query, that is… suspect, but the idea is that having JavaScript applied on the results of the query give us a lot more freedom and easy of use.

The actual client side in C# is going to remain unchanged and was already updated to talk to the new backend, but in our dynamic language clients, I think we’ll work to expose this more, since it is a much better fit in such environments.

Finally, here is the full query, with everything that we can do: 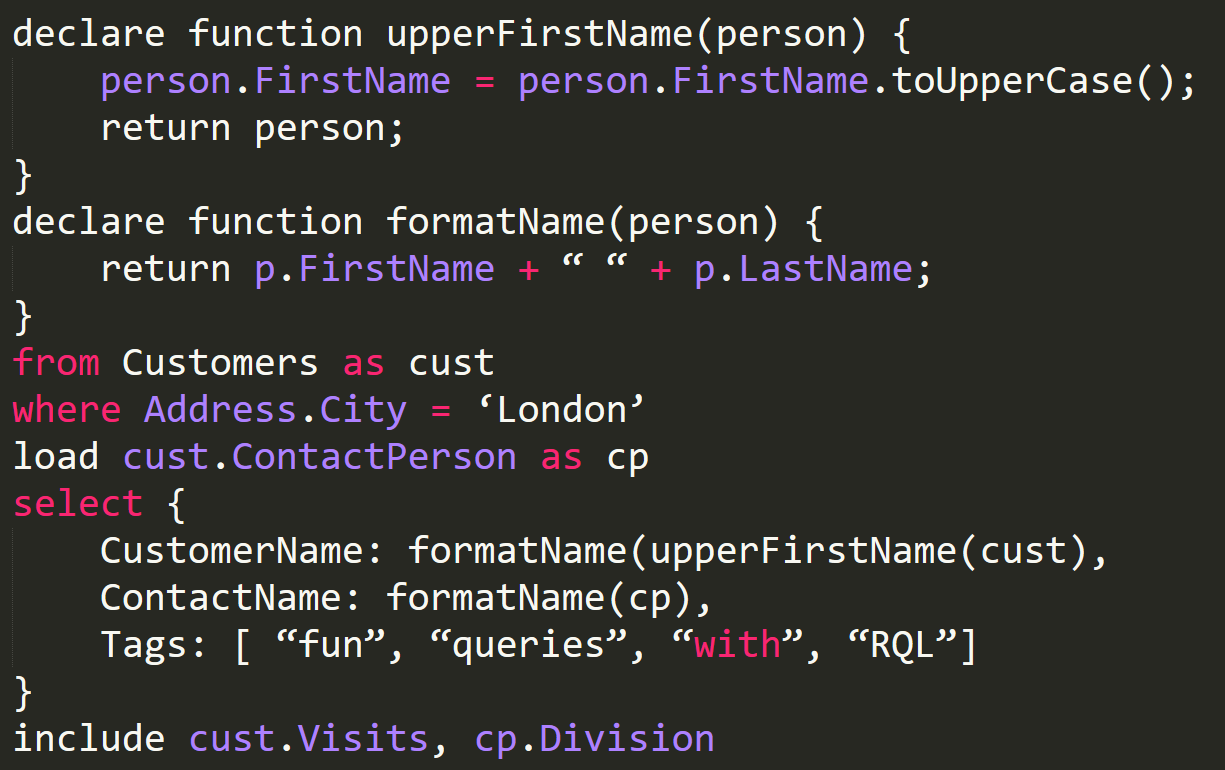 Don’t focus too much the actual content of the queries, they are mostly there to show off the syntax. The last query now has the notion of include directly in the query. As an aside, you can now use load and include to handle tertiary includes. I didn’t actually set out to build them, but they came naturally from the syntax, and they are probably going to stay.

I have a lot more to say about this, but I’m so excited about this feature that I just got to get it out there. And yes, as you can see, you can declare several functions, and you can also call them from one another so there is a lot of power at the table right now.

@Oren: there's an example missing after this part "Here is how we can traverse the object graph on the database side:"

instead of having to define and deploy transformers [...]

Does that mean that Transformers are out of the game, or am I missing something? While I like the power this approach gives to the developer I am wondering if there is gonna be some strongly typed layer on top of it, particularly to support refactorings and similar.

Balázs, Yes, we are killing transformers. You'll be able to do all you could do with transformers with this approach, and you'll have strongly typed Linq support on the client side to help you

Is the "let us try something else" image the correct one? The following text talks about JavaScript object literal and code duplication, but there's nothing like that in that code.

Svick, See the image after that, with the formatName method

Re: Svick's point - but the image preceding that, which the following image is meant to be motivated by doesn't contain "a JavaScript object literal" nor "code duplication here, in the formatting for customer and contact names".

It's a simple select cust.Name,cp.Name.

Have you evaluated implementing support for N1QL? If so and you decided not to pursue it, why not?

Matt, I looked at that, but it is doesn't really match the internal operations that we want to expose